Captain Richard B. Haley was born July 27, 1810 in Tennessee. A veteran of 1835 Texas armed resistance to Mexican forces, he participated in the Grass Fight (Nov. 26, 1835), and in the victory over General Cos’ forces at San Antonio on Dec. 10, 1835. He served in the Shelby County Mounted Milita 1838-1839. For his services as an early colonist and soldier, he was given six land grants. After 1850 he lived in Leon and Freestone counties. Twice married, he had three children. A friend of General Sam Houston, he was a farmer and had operated Haley’s Ferry on the Sabine River. He died July 19, 1877 in Freestone County and is buried in the Salem Cemetery there. 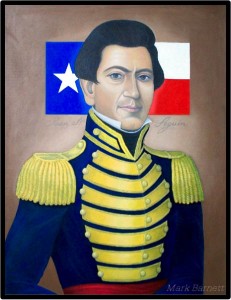 Juan Nepomuceno Seguín (1806–1890), political and military figure of the Texas Revolution and Republic of Texas, was born in San Antonio on October 27, 1806. He was elected alderman in 1828 and served as political chief of the Department of Bexar in 1834. In 1835 he led a militia company to Monclova. After the battle of Gonzales in October 1835, Stephen F. Austin granted a captain’s commission to Seguín, who raised a company of thirty-seven. His company was involved in the fall of 1835 in scouting and supply operations for the revolutionary army, and on December 5 it participated in the assault on Gen. Martín Perfecto de Cos’ army at San Antonio. Seguín entered the Alamo with the other Texan military when Antonio López de Santa Anna’s army arrived, but was sent out as a courier. At Gonzales he organized a company that functioned as the rear guard of Sam Houston’s army, was the only Tejano unit to fight at the battle of San Jacinto, and afterward observed the Mexican army’s retreat. Seguín accepted the Mexican surrender of San Antonio on June 4, 1836, and served as the city’s military commander through the fall of 1837, during which time he directed burial services for the remains of the Alamo dead. He resigned his commission upon election to the Republic of Texas senate at the end of the year. He was the only Mexican Texan in the senate, serving in its second, third, and fourth congress.

Martin Baty Lewis (1806–1884), soldier and county official, was born in Clark County, Indiana, on January 13, 1806, the eldest son of Sally (Lemasters) and Samuel S. Lewis, who also served at the Siege of Bexar. He married Nancy Moore 1825 in Indiana and they had eleven children. He emigrated to Texas in January 1830, […]

Pleasant Marshall Bull was born Feb. 18, 1808 in Grainger County Tennessee to John Valentine Bull and Fetna Bean. He came to Texas to acquire land, arriving in 1831 and settling in Brazoria, Austin Colony. He was a veteran of the Battle of Concepcion and the Battle of Bexar and is on the muster roll […]

Colonel Moore was elected Colonel Commandant of the Army of Texas on October 11, 1835 in Gonzales, the same day Stephen F. Austin was elected Commander in Chief and Edward Burleson, Lieutenant Colonel. Moore resigned his office on November 6th in Bexar and Ed Burleson was elected to replace him on November 7th. MOORE, JOHN […]

Is there a veteran missing from the Participants list? Do you have additional information for a Veteran who is already listed? If so, use the “Proof of Service” form to submit your data.